IN mid July Founder Andy and Larry traveled to Tennessee to visit with Garry Thomas who runs The Ten. Division of HONOR AND VALOR FOUNDATION. GARRY has a TV PROGRAM which is produced by the Nashville Broadcasting Network and is run on ROKU, which reaches 5.5 million households. The shooting of the show went smooth and will view in August! While there we worked on a promo which should be ready by Sept.

Also in JULY outfitter Jamie P. was asked to do a fishing show (30min) for CAROLINA SPORTSMAN which was shown on Fox Ch 26 in Wilmington NC. Jamie had on a HONOR AND VALOR T-Shirt and we got GREAT LOGO EXPOSURE!! look for a show with us hosting a Veteran or active duty this fall!!

WE are very excited about these opportunities we were exposed to! Also in July we took on a big project for our REINFORCEMENT PROGRAM. Carl S is an ARMY VETERAN..MP..two years of service. WE joined forces with our church and the county BAPTIST ASSOCIATION on this project. The needed repairs included two rooms that needed repair from the ground up, a half bath that was redone from the ground up.

Outside the home we replaced damaged fascia boards and wrapped the 220’ with new vinyl soffit and wrapped aluminum fascia boards. The youth group also did tree trimming and yard work. Andy, Army VET STERLING ,Larry and other neighbors provided the labor for the 5 days to complete the project. New swiflock flooring was installed in the two damaged rooms after the sub-flooring was repaired.

Check out the photos!!

HONOR AND VALOR did not have a sponsor for our portion of the material cost… this is an example of what we do. Andy Dwyer Incorporated license #48294 and Cruse Construction License #52481 are the official builders for the Reinforcement Program.

Also in July we had a campaign on our FB Page to sell RED FRIDAY T-Shirts, this ends in mid AUGUST>>Get you one!! WE are looking forward to the fall. WE have several locations to take Military folks and kids Dove hunting. This will be our first year hunting our duck impoundment …all crops are up and looking good! Alan and Victor has food plots doing well in IOWA and looking forward to taking some trophy deer in DEC. upcoming news this fall with a major entertainment group in Nashville Tenn!! Contact us through our web page and with a donation of 25$ receive a HONOR AND VALOR T-Shirt with our logo and a decal for your vehicle. Until next time….CARRY ON!!!

In August Andy and Larry were in RENO, NV and had the privilege of hosting two vets on a golf outing. Army Vietnam Vet – GARY and Air Force Vet LEE joined Andy,Larry and Dave at the RED HAWK golf club for 18 holes on the mountain course. We all had a great time and met new friends. Lee and GARY were very appreciative and Andy’s response was “you served us…now we can do for you..it’s what we do” !! 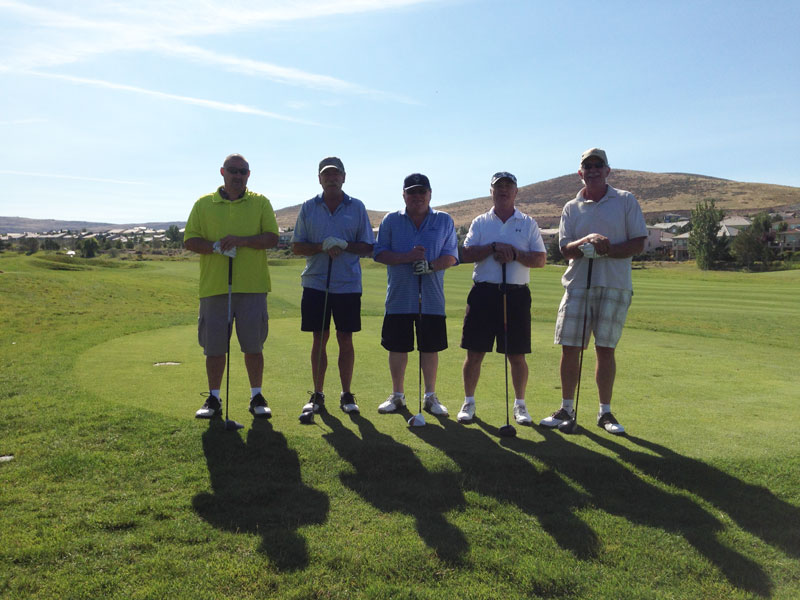